This site requires that JavaScript be enabled, but either your browser does not support JavaScript or it is disabled.
To access this site, please upgrade your browser, or turn on JavaScript.

Since her election in June, Mayor Irving has been working with Congressman Steve Israel (D-Huntington) to bring the necessary parties to the table to resolve this long standing problem.  A joint meeting was held with Congressman Israel, the Village, the United States Army Corps of Engineers and New York State Department of Environmental Conservation.  In addition to Congressman Israel and Mayor Irving, the meeting included Colonel Aneillo Tortora, Commanding Officer, New York District, USACOE, and Peter Scully, Regional Director of the NYS DEC and senior support staff of all the participants. Mayor Irving ran on the promise to seek intergovernmental cooperation in resolving Asharoken’s “Sand on the Beach” dilemma.

Asharoken, for years has claimed that the Northport Power plant, originally built by LILCO and now owned by National Grid, has interrupted the natural flow of sand to Asharoken located west of the plant.  The original operating permit issued by the Army Corps of Engineers to LILCO required the utility to regularly dredge the channel and discharge inlet of accumulated sand and deposit on Asharoken Beach.  The dredging in the past was intermittent at best, and failed to provide sufficient sand to replenish the beach, which had accreted, not eroded, before the construction of the plant.

Asharoken had instituted a law suit against LILCO which was dismissed and is currently awaiting a decision on appeal. Most of the Village’s resources were directed to the litigation.  Any discussions with the Army Corps for enforcement of the original permit conditions were met with resistance because of the Village’s past “all or nothing attitude”.

Mayor Irving promised a new era of cooperation and immediately sought Congressman Israel’s intervention and assistance from all parties. Mayor Irving also sat down with representatives of National Grid to open a dialogue of cooperation. 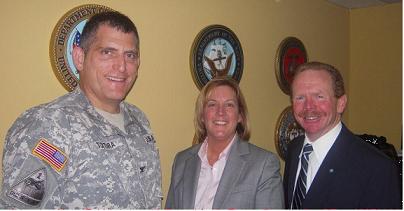 Asharoken Mayor Patricia Irving with Colonel Aneillo Tortora, Commanding Officer, NY District, US Army Corps of Engineers and Peter Scully, Regional Director, NYS Dept. of Environmental Conservation at the offices of Congressman Steve Israel material on Asharoken beach. A 2004 Army Corps analysis estimated that the lost sand amounts to an average of 15,000 cubic yards of sand per year and the utility has been replacing on average 10,000 cubic yards per year. The Army Corps has agreed to enforce the permit, require at least 15,000 cubic yards per year and require the utility to make up for any short fall. Richard Tomer, Chief of the Army Corps’ Regulatory Branch indicated that National Grid has agreed to comply. National Grid is currently dredging sand and stock piling it on the power plant site. It will be moved to Asharoken Beach shortly. The Army Corps is also exploring the requirement of the utility to install a permanent sand by-pass system that was addressed under the original operating permit.

There was a concern that NYS Department of Environmental Conservation would stop any efforts to replenish the sand on Asharoken beach. NYS DEC made it clear that they recognized that something has to be done with Asharoken’s beach, and dredged sand must come from somewhere. The DEC objects to the dredging of a “borrow hole” in Long Island Sound, for environmental reasons, but has already identified other dredge sites where the shortfall of the sand may come from. The Army Corps and DEC have already scheduled a joint meeting in Albany to address this issue and Congressman Israel will have a member of his staff in attendance.

Mayor Irving made it clear that these efforts alone will not solve Asharoken’s erosion problems, but it is a start. Furthermore, Mayor Irving also insisted that she needs the Army Corps assistance, and the DEC cooperation, in devising a program and methodology that will restore all the sand that the beach has lost in the past 40 years and keep it there. Both agencies acknowledged that they were there to “put sand on Asharoken’s beach”.  Although this may take years to complete, Congressman Israel made it clear that this project was not going to be one of those that is only studied and never acted upon.